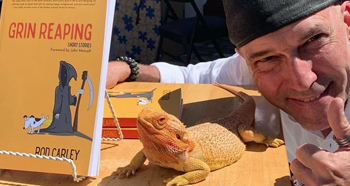 An author and former Stratford Festival director is bringing his latest book, Grin Reaping, to Stratford’s Fanfare Books for a reading and book-signing event later this month.

Inspired by the works of famously reclusive author J.D. Salinger and his tales of the fictional Glass family, Rod Carley’s newest book is a collection of short stories about another fictional family, the Boyles.

“(Salinger) had one older sister and he filled that (familial) gap in by creating a fictional family. Likewise, I had one younger brother and I’d always wanted to have a larger family, and especially sisters,” Carley said. “So the stories (in Grin Reaping) came out of wanting to expand my own sense of family but also, in creating this character, Rudy Boyle, I wanted to find a figure through which I could inject my observational humour on the world as both a creature and a critic of the human predicament.”

In this series of 14 interconnected short stories and musings, Rudy Boyle, a northern Ontario English teacher stuck both in middle age and in the middle of his five siblings, transforms the strangeness of his everyday life into exaggerated home-movie prose. From the significance of tuna fish to the threat of aliens to big-ticket items like mortality, gender, climate change and Armageddon, Rudy tackles a range of topics with a wry, self-deprecating wit.

As he shares such snippets, Rudy exaggerates mundane situations into comic celebrations of the life of the mind, never letting the truth get in the way of a great story. His reminiscences deal not only with the absurdities of human nature but also encompass the grief of losing family.

“I write humour as a tonic, I think. People need a laugh and we inject humour into our daily lives all the time because it makes being on the planet easier and it prevents us from jumping off buildings,” Carley said. “The title, Grin Reaping, over the course of writing the book I lost my parents and a few friends, so then that sense of loss and the grieving we go through became the foundation of the book and how we laugh when there’s really nothing else we can do.”

Carley also said his time in theatre had a tremendous impact on his writing, helping flavour his subject matter while informing how he writes and develops his characters. He also reads his work out loud as he’s writing to hear how it sounds when spoken, adding to that sense of the theatrical.

“There’s a similarity between writing fiction and directing theatre or as an actor. You’ve got a central character who you throw every possible obstacle at them, and then they have to somehow overcome these obstacles to achieve an objective, and then over the course of a play or a book, you get to see if they’re successful or not. So those elements are similar. Also, I’m a very dialogue-based writer, and a lot of that came out of my work in the theatre,” Carley said.

Carley worked for the Stratford Festival as a resident assistant director in the early 1990s under then-artistic director David William. He became the first recipient of the Festival’s Jean Gascon Director’s Award and was awarded three Tyron Guthrie Awards during his tenure with the Stratford company. Carley went on to direct numerous Shakespearean productions across the province and, in 2009, was a winner of TVO’s Big Ideas/Best Lecturer competition for his lecture, Adapting Shakespeare Within a Modern Canadian Context.

Currently living in North Bay, Carley began writing humorous fiction about 10 years ago. His first book, A Matter of Will, was a finalist for the Northern Lit Award for Fiction while his second book, KINMOUNT, won the silver medal for Best Regional Fiction from the 2021 Independent Publisher’s Book Awards and was one of 10 books longlisted for the 2021 Leacock Medal for Humour.

“My second book, KINMOUNT, is all about a down-and-out classical stage director named Dave Middleton who reluctantly takes a job directing Romeo and Juliet in Kinmount, in this rural farm community, and everything that can go wrong does,” Carley said. “He finds himself this reluctant emissary of truth in a battle of artistic integrity and censorship. So that book came out a lot of my experiences directing Shakespeare over my career.

Carley will be reading from and signing copies of Grin Reaping from 1 p.m to 3 p.m. at Fanfare Books in Stratford on Saturday, Aug. 27. Along with his latest book, copies of KINMOUNT will also be available for purchase during the event.