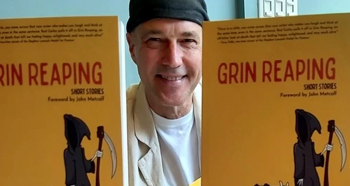 The acclaimed writer, now 60, spent his childhood surrounded by books. His mother Belva would take him and his younger brother to the library every week for a new stack of stories and would read to the boys every night before bed.

“She instilled in me a great love of reading,” Carley said in a phone interview this week.

Carley grew up in Brockville with his parents Hewitt and Belva, and brother Greg, in a home that nurtured his innate love of books, he said. As he grew, he went from reading picture stories with his mom to reading authors like C.S. Lewis and J.R.R. Tolkien on his own.

By the time he grew up and was ready to flee the nest at 19, his “thirst for knowledge” and “love of books consumed” him.

“J.D. Salinger’s fictional Glass family were heroes for me at this age — quirky role models living in their New York City apartment on the Upper East Side. I wanted to be an actor like Zooey, a writer like Buddy, and a guru like Seymour,” he said.

“These, of course, were not the career paths being pushed by my high school guidance counselor at Brockville Collegiate Institute.”

He wasn’t dissuaded from a life in the literary world, though, and left Brockville for Toronto, where he studied theatre and writing.

He eventually made his way to North Bay where he currently lives, and managed to propel his love of storytelling into a multi-faceted career.

He wears many hats in his professional life; he’s the artistic director of Canadore College’s Acting for Stage and Screen Program, and an English professor at Nipissing University. He’s also a freelance director and actor, and an author of three books, the latest of which – Grin Reaping – he is currently touring the province to promote.

The novel is a series of 14 interconnected short stories, based on a character called Rudy Boyle, a frustrated college English teacher stuck both in middle age and in the middle of his five siblings, Carley said.

“He translates the strangeness of his everyday life into an exaggerated home-movie prose,” Carley said of the character he created.

“He’s got a dry, self-deprecating wit. With his observational humour, he tackles a range of subject matter, from the big ticket items like Armageddon, climate change, diversity and mortality, to a lot more ridiculous, silly items, as well. But he never lets the truth get in the way of a good story.”

This genre of writing can be challenging since humour is subjective, he said, but putting a comic spin onto life’s heavier moments is how he and many others cope with life’s hardships – like the death of his own parents.

“I wrote the book, overall, as kind of a tonic for readers for the difficult times we’ve been going through. We all need a laugh in the face of all kinds of different adversities,” he said.

Hard as the task of writing humour might be, Carley has been recognized by his peers and critically acclaimed for his work in the field.

His first novel, A Matter of Will, was a finalist for the 2018 Northern Lit Award for Fiction. His second novel, Kinmount, won the Silver Medal for Best Regional Fiction from the 2021 Independent Publishers Book Awards and was one of 10 books longlisted for the 2021 Leacock Medal for Humour.

Of his third and most recent book, Terry Fallis, two-time winner of the Stephen Leacock Medal for Humour, gave a rave review.

“Many writers are serious. Fewer are funny. If you’re lucky, once in a while, you come across that rare writer who makes you laugh and think at the same time, even in the same sentence. Rod Carley pulls it off in Grin Reaping.”

When he’s not at his cottage in Seeley’s Bay for the summer, Carley has spent recent months on a book tour throughout the province, and has already been to Brockville once to a sold-out crowd.

All of his books will be available to purchase at the signing, he said, and they are also available locally at Beggars Banquet Books in Gananoque.