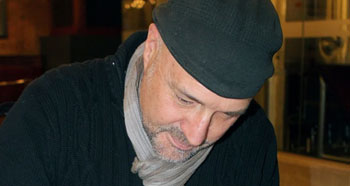 Leacock nomination ‘a shot in the arm’ for novelist

When Rod Carley found out his second novel, Kinmount, had made the long list for the Stephen Leacock Medal for Humour, it was “like a shot in the arm.

“It is an honour for sure, especially when you look at the other authors” who made the list of 10 finalists.

Although Carley didn’t make the short list for the awards which will be announced in June, he’s still floating on the thrill and honour of making the long list.

Kinmount is a celebration of the human spirit, with director Dave Middleton attempting to maintain the integrity of Shakespeare’s Romeo and Juliet in the face of an eccentric producer and a “gang of misfits” in a small rural theatre.

Despite all the obstacles facing the community theatre production, “he keeps fighting to make it happen,” Carley said in an earlier interview.

That it was considered for the same list that saw some of Canada’s best humourist novelists, he says, is an incredible honour.

“Humour is an interesting animal, because everyone is different, and this takes in all different styles of humour. To make a list like that is very special indeed.”

The Stephen Leacock award is unique, Carley says, in that it is the only award of its kind recognizing humour in writing.

“It’s like what Rodney Dangerfield said in his routine, ‘I don’t get no respect.’

“I don’t know if humour gets the respect it deserves.”

Writing humour, he says, isn’t as straightforward as it appears.

“You have to conceal it in the writing so it’s not obvious,” and that ends up with almost everyone who reads it saying “I could write that.

“But the sheer amount of work, writing humour, balancing the humanity and the hilarity, is incredible,” he says.

And, whether it’s a humourous story like Kinmount or the collection of short stories he has recently completed, or the third novel he is now working on, “I’m in the book. That’s what I know best. What you write has to come from your point of view of the world.”

Humour, Carley says, is the writer’s judgment of the world.

Making the long list, he says, with writers such as Joseph Kertes, Thomas King and Morgan Murray – the writers who made the short list for this year’s award – put him in some stellar company.

All three writers are writers Carley has a lot of respect for.

It’s also a recognition of his publisher, Latitude 46 from Sudbury.

“They’ve been around for six years now, and it’s really important to see a little publishing house get that kind of recognition.”

The next edition of Kinmount will be able to tout that it was nominated for the Leacock Medal, while extending readership for his future endeavours.