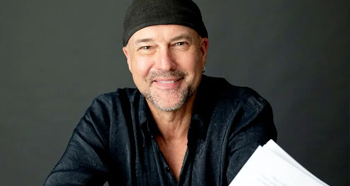 Rod Carley’s humorous and timely fight for the arts

First things first: Rod Carley’s latest novel, about a small-town conspiracy to censor Shakespeare, is not based on his three summers staging the Bard’s plays in Brockville.

“They are not in any way a part of the story,” the Brockville-raised playwright, director and author jokingly insists, while discussing Kinmount, his second novel.

Carley, who was inducted into the Brockville and Area Music and Performing Arts Hall of Fame in 2018, now calls North Bay home.

Though his career has been in theatre, both on stage as a playwright, director and actor, and as a theatre educator, his foray into fiction continues.

Kinmount, published by Latitude 46 Publishing in Sudbury, is his second novel. His first, A Matter of Will, was a finalist for the 2018 Northern Lit Award for Fiction.

He describes Kinmount as a humorous, quixotic romp, “a comic tale about this director who has to endure everything to get the show up.”

Dave Middleton, a middle-aged, down-on-his-luck director who happens to be a descendant of the 17th-century English playwright Thomas Middleton, lands in the village of Kinmount, to direct an amateur production of Romeo and Juliet for an eccentric producer.

“As soon as he arrives he knows he’s made a mistake but he needs the gig,” said Carley.

The central character falls into a “rural conspiracy” to censor Shakespeare and an “absolutely harrowing” series of events as he fights for artistic integrity, said Carley.

“It’s about how the arts are so important to a community.”

An award-winning director, playwright and actor, Carley is also the artistic director of the Canadore College Acting for Stage and Screen Program and a part-time English professor at Nipissing University.

In his younger days, Carley directed Hamlet, Julius Caesar and Coriolanus in Brockville during the 1990s, back when Riverfest still existed and was big enough to make room for the Bard.

While the experiences of Dave Middleton are not the product of his Shakespeare summers in Brockville, they do stem from fights he had to fight elsewhere in his early 30s for the sake of artistic integrity, said Carley.

“Most things that happen to me I process through a humorous filter,” he said.

But Carley also insists “the Kinmount in the book is not the actual community that exists,” referring to the village in the Kawartha Lakes area.

Carley said he chose Kinmount for “the fun of the name,” the impact of a noun yoked to a verb.

Kinmount the book has been well-received, he notes, citing reviews from no less than Leacock-Medal-winning humourist Terry Fallis, who writes that “not since Robertson Davies’ Tempest-Tost has a community Shakespeare production been so much fun.”

The novel is available locally at Beggars Banquet Books in Gananoque, or online.

The book seems all the more valuable now – and stop me if you’ve heard me make this pivot before in this column – as a reminder of the importance of the dramatic arts at a time when they are missing.

“Now that we’re in the middle of COVID, it’s taken on a different kind of meaning,” said Carley, reflecting on the importance of live theatre.

“It reminds people of what we’re missing.”

While Brockville ponders how quickly it can reopen the Brockville Arts Centre amid the resurgent pandemic, and artists of all kinds scramble to find meaningful ways to produce during this time of isolation, Carley has used a medium that adapts perfectly to confinement, to make us pine for one that does not.

If Kinmount serves as a fast-paced comic escape from all the trials of this pandemic, its message about artistic integrity now has a broader dimension, one Carley could not have imagined when he started writing it.

“It’s the vaccine that’s going to stop COVID in its tracks,” he said.

“But it’s the arts that are going to get us through.”

City hall reporter Ronald Zajac can be reached at rzajac@postmedia.com.