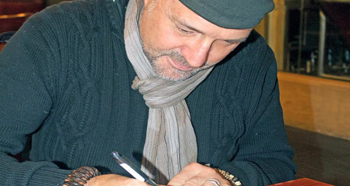 It’s going to take a vaccine to end the COVID-19 pandemic.

But it’s the arts that will help see us through it.

And it’s the arts – and one particularly rough road to produce Romeo and Juliet – that’s at the centre of Rod Carley’s second novel, Kinmount.

“It celebrates the human spirit,” Carley says of the novel, published by Latitude 46 of Sudbury.

In the novel, the protagonist, director Dave Middleton, strives to maintain the integrity of Shakespeare’s classic in the face of an eccentric producer and a “gang of misfits” in a small rural theatre.

“No matter what the obstacles are, he keeps fighting to make it happen,” Carley says of Middleton.

It’s an apt metaphor for the time of pandemic we now find ourselves in.

“These are times when you can’t go to live theatre, to live symphony, to live dance shows, to live music,” he says. “This is a reminder of what we are missing. It’s about the importance of what arts means to a community, and it gives us hope for its return.”

It’s a world Carley is quite familiar with. Before coming to North Bay 22 years ago, Carley was himself a freelance director, receiving grants to go to different communities for “a short, intense time to put on shows” across the province and into the United States.

And there were a few occasions, he admits, when he faced the central difficulties facing Middleton, where “a producer would want to make changes to the script” that violated the playwright’s central theme.

“I always fought for the integrity of the writer, and on two occasions had to leave a project because I couldn’t do what the producer wanted.”

But while Kinmount takes a comedic look at the world, Carley admits that, in real life, it was “at times a harrowing experience.”

He remembers thinking at the time that “someday this would make a good story. I just didn’t know that years later it would be my second novel.”

It only proves the old adage, he says, that when you combine tragedy and distance, you get comedy.

“I knew I wanted to write a comic tale about a disaster, about putting on a production,” Carley says.

And with the launch coinciding with the COVID-19 pandemic, he says, the story and its optimistic message seem somehow right for the times.

“The book is sort of filling the gaps,” he says. “No one can see live theatre right now. The book is about survival, about the necessity of the gift of laughter in dark times. We all need that right now to cope.”

He reads out a quote from the book.

“Looking at that, theatre will somehow survive COVID.”

Carley points out that all the characters are fictional, although some are “loosely based composites of a number of different people” he has encountered over the years.

Some were “just inventions of my overactive imagination.”

But the “mayhem” the central character faces – well, that’s a fact of life in the theatre world, he admits.

The novel has garnered numerous positive reviews, including from two-time Stephen Leacock Medal for Humour winner Terry Fallis, who calls it “funny, thoughtful, compelling and filled with humane insights about people and their passions. Not since Robertson Davies’ Tempest Tost has a community Shakespeare production been so much fun.”

Kinmount is available at Chapters and Amazon.

The Wordstock Sudbury literary festival has now been scheduled online through Zoom. The seventh edition of Northern Ontario’s premier literary festival takes place Nov. 5-8. All sessions will take place online, aside from the open mic hosted by Black Lives Matter, which is being held at the Sudbury Indie Cinema, 162 Mackenzie St. The schedule is available at wordstocksudbury.ca, along with guest author information.